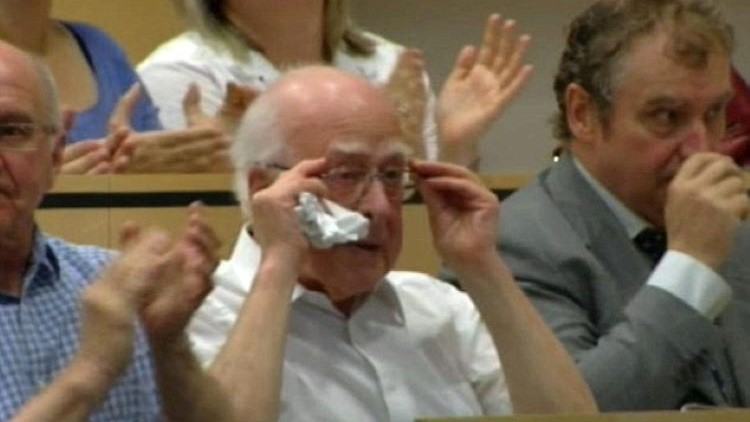 Featured image: Peter Higgs, in tears, on 4th July 2012, the day the discovery of the Higgs boson was announced to the world.

As the world revelled in response to the monumental discovery of the Higgs boson, I couldn’t help but feel proud of my good, old buddy Science. Watching Peter Higgs wipe tears from his eyes upon the much-anticipated announcement of the Higgs boson’s discovery and Stephen Hawking muster up a laugh as he recounted a bet he lost made me quite emotional (for a physicist).

The Higgs boson can now be declared an official elementary particle of the Standard Model: it is evidence of the existence of the Higgs field. We can now confidently explain how particles (and, therefore, us) are ‘given’ mass.

But why should this news excite anyone apart from particle physicists? And, given that evidence of this ‘God Particle’ will be used as evidence of the Big Bang, how will those of a religious persuasion react?

In discovering the Higgs boson the scientific community has conquered the challenge of putting together a model that can explain the very fabric of the Universe. Many have duly proclaimed the discovery to be one of the greatest breakthroughs in the history of science (certainly true for my lifetime), alongside the Moon landings and the unravelling of DNA. In getting here we have learnt so much and developed a deeper understanding of the Universe.

Still, a cynic might point to this being a purely scientific triumph—a triumph of significant cost at £2.6 billion. But many societal benefits have emerged already.

The whole world will benefit from various technological developments. The World Wide Web was already founded at CERN, where the Large Hadron Collider is sited. Now we can boast about investments in electronics, medicine, treatment, and superconductors too. Pharmaceuticals which are essential for cancer imaging, for example, have been researched during the hunt for the Higgs boson, as have radiotherapy treatments. Meanwhile, vast numbers of students and professionals have benefited from each other’s resources. Their experiences will enrichen our societies when their knowledge and skills are transferred to disciplines we feed off directly. Generally, too, people are excited by the discovery. This will inspire them into filling career vacancies in STEM (science, technology, engineering, and mathematics) subjects. Furthermore, many countries have collaborated cordially and successfully, demonstrating we can enact great diplomacy if we need to. And, still, the news continues to unfold and excitement grow.

Who knows what else uncovering the Higgs boson will do: it’s unquantifiable. However, what we have demonstrated already is that we can set our sights on a common goal and bring a prize home. The whole world was, therefore, able to celebrate this remarkable achievement together following collective and concerted human effort. The fruits are there to see, inspiring the next generation to contribute to the next project. Implementations of the scientific method, as an instrument of discovery, can achieve great things collectively.

No cynic can ruin this moment for me. Or can they?

Whose achievement is this?

People of religion might, however, claim the discovery to be falsely contradictory to the existence of God. Indeed, they already have made such claims (as we shall see). We are all entitled to a view but this one, I believe, is made on shaky foundations.

There is modesty associated with science that, contrary to cynical perspectives, scientists ought to be proud of. Scientists don’t outright claim to have all the answers to hand already (at least they shouldn’t). The Higgs boson has presented us with even more problems. But this is not a bad thing. Undoubtedly, it will do us good to continue exploring the Universe and creatively find solutions.

While scientists make predictions that turn out to be proven incorrect, they aren’t cornered into standing by them. This is in contrast to how people of Faith act. In my lectures I have learnt about the Higgs boson. If scientists didn’t observe any evidence of it, the future of physics wouldn’t be in jeopardy. To the contrary, scientific theory stands to be constantly corrected.

Equally, it may take a while to prove something to be true. The Higgs boson’s existence was first postulated in the 1960s and it took until now to find it. Peter Higgs’ paper was initially rejected. Now it has been accepted, for we have the data from years of work to corroborate it.

A religious person, on the other hand, is used to espousing rigid views of a certain doctrine, which brings me to a quote from Right Reverend Lee Rayfield, a scientist and the Bishop of Swindon, today in The Independent:

If I’m sensing his drift correctly, the implication is that only Faith can fill certain gaps in our understanding. This is probably true for things like morality and perhaps true for metaphysical problems like free will and consciousness. But what makes a religious person more qualified to answer any of these questions? Sure, we can only probe the physically observable Universe with science. But many religious claims are negative and cannot be attested by anything. That is, since they can be neither proven nor disproven (like the Tooth Fairy), their claims are unhelpfully and conveniently contingent. Scientists will carry on putting forward hypotheses and testing them, allowing us to progressively move in a direction; Right Reverend Rayfield will carry on making claims that carry no weight and move us in any direction at all.

And so it seems the more we uncover of nature the more God retreats: the more we discover with science the smaller the things we haven’t yet discovered become. These are the things that naysayers will exploit in an attempt to dismiss scientific discovery. Maybe they will run out of room and concede claims to be true (e.g. in terms of evolution and the Big Bang); maybe they will always find something, for their god is a god of the Gaps. But where they retreat scientific discovery will flourish in its place. Better, the two aren’t mutually exclusive: we can happily coexist with different views.

A victory for all

As a community we have successfully used our tools for understanding the Universe and its majestic nature for exactly that. We should be proud of the knock-on benefits for society that have ensued.

Nonetheless, discovering the Higgs boson should be treated as a victory for all, not just scientists. Together we set our coordinates for a destination: we successfully arrived there. With newfound confidence, we can head for a new destination.

Where shall we go?