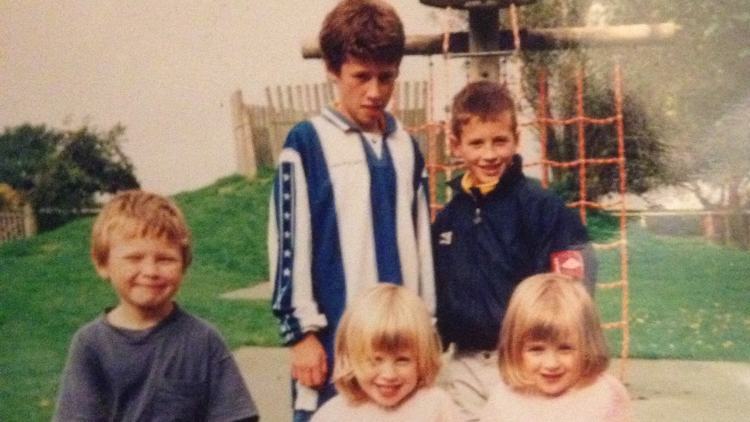 Featured image: All five Ross children, probably around the year 2000 (I'm the shorter one on the top row).

To be high-achieving one generally needs some intelligence or skill but they also need a stable and supportive home environment in which they have space to think, work, and express themselves. Children who have these things available, as well as financial safety nets and alternatives if things go wrong, I think, are more likely to feel capable and inspired, meaning they will take more chances and be more confident in taking necessary steps. Sometimes it felt all I had was pure determination: I wanted to achieve but I had no particular objectives. I was conscientious because I wanted to make a name for myself and my family but, fundamentally, I was aimless.

Three factors encouraged me to write this short article. One is that I am going through a rather reflective phase: I now want to be proud of my working-class roots and the number of obstacles I have had to overcome in order to be the person I am today—whatever that means.

Secondly, I want to quash misconceptions regarding my social status in early life. I find it quite insulting when people underestimate my achievements, which is usually expressed through ignorance, so I want to rectify it.

The third is enlightenment. I recently read Chavs: The Demonization of the Working Class by Owen Jones, which taught me how Thatcherism, individualism, and growing inequality have begotten stigmatisation of working-class people. That is, despite the destruction of jobs and communities that associated with lower social classes, many of which were high-skilled and well paid (most notably mining), there are prevalent attitudes that feed the narrative that poor people deserve to be poor because they are feckless and lack aspiration. In reality, with the forced collapse of industry in the Eighties, the dismantling of trade unions (and, with it, their collective voice), and inept housing policies (to name but a few factors), there is a strong argument to suggest that successive governments are responsible for massively unfair inequality in the past. Today we can see that we do not live in a fluid, meritocracy where people at the top are purely there on, well, merit. I feel as though this book vindicates my resentment toward peoples’ attitudes on working-class people. Now, in my own way, I want to articulate my story and join the fight to reverse the ‘chav’ caricature that disparages so many people and obscures governmental blame. I want to be prouder of what I’ve achieved, not be ashamed of it. 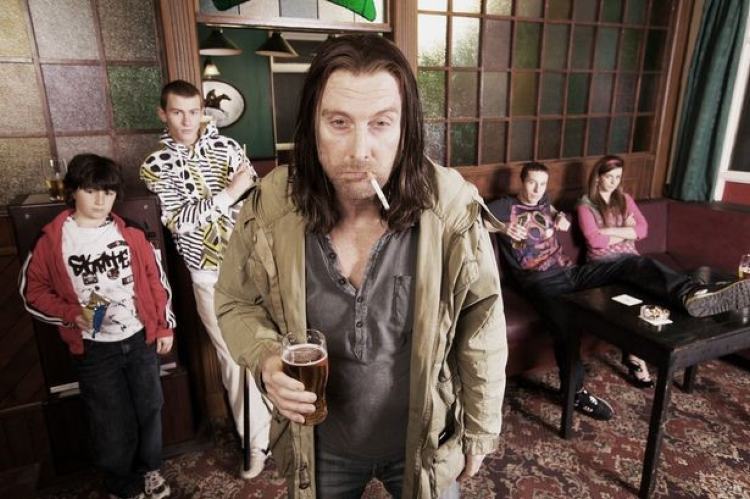 For me, the concept of 'chav' has been conflated with what it is to be working-class. Many portrayals in the media act to perpetuate this narrative.

At this point I deem it necessary to define ‘working class’. Fundamentally, it is often used to describe workers who have nothing to sell but their skills and labour power. They are employed into jobs where they expend labour to produce economic value for the employer—typically where the employee is paid on an hourly basis. Their employment is usually associated with low income. (I have experience in these types of low-income jobs—e.g. roles on building sites, offices, kitchens, in schools, and more. I’ve also been ‘on the dole’.)


A call centre: A setting of a modern-day, working-class job? A role in one of these exhibits similarities to the working-class jobs of old, such as those in factories and in mines. Now, however, there is less pride, community spirit, and labour power to be seen in the employees.

Clearly, there are cultural differences between social classes (by definition). In practice, middle-class families may have a history of university in the family, where academic interests and aspirations have always been rife. Maybe more books are in the house; Mum and Dad display extensive vocabularies. Perhaps they can help you with your homework and employ a tutor for you. You may own or share a car, enabling you to be more versatile with respect to the demands of work. Moreover, as a member of a middle-class family, you may have greater access to various opportunities in the workplace through relatives with connections and influence compared to children from lower-income families. Perhaps your family’s generous financial help and assistance on property market allows you to more-easily undertake voluntary work as well. (I would never assume these facts about anyone, though.)

These aspects of middle-class life were always alien to me. Referring back to the definition of ‘working class’ above, my mum has always undertaken low-wage occupations (e.g. as a cleaner and work in a café). She has always worked incredibly hard. As the sole provider of our house, this, I think, rendered us working-class. Furthermore, she was a recipient of working tax credits and child benefits, whilst I received Education Maintenance Allowance (EMA) and grants at university. I look back at these times of my life and think how much my mum did for us. She was a single mother of five children working in jobs every working day with very few rewards (if any) and much of her time and money was spent on us. 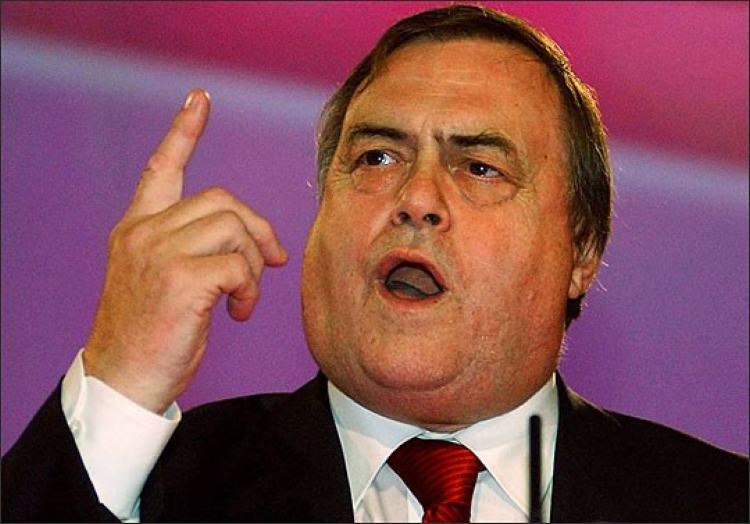 It does, however, seem to me that, as a society, we have adopted middle-class lifestyles and joined in on an obsession to accumulate wealth. As the quote goes: 'We are all middle-class now.' Bollocks.

My upbringing was not a fertile ground for attainment and prosperity. Financially, I received nothing to assist with my studies, except for some money from the government. More significantly, in my opinion, was the lack of support. That is not to say my family did a bad job! That is not true. Rather, no one could really help me with my work. Moreover, I had no space to study: there were often seven people staying in our three-bedroom house in Kings Worthy, Hampshire, and I shared a small bedroom with my two brothers. There was always noise and lots of distraction. Compounding this home environment was a lack of academic presence in the house: there were no educational role models for me to follow, no connections, few books, and a struggle to understand what would be expected of me in academic environments. When it came to studying at university it often felt as though I didn’t belong there. Even when I wore my university football gear around campus I felt undeserving of the success I was parading; other players probably thought nothing of it. Having my initials next to the university badge, even on a tracksuit designed for a traditionally working-class activity, felt odd. 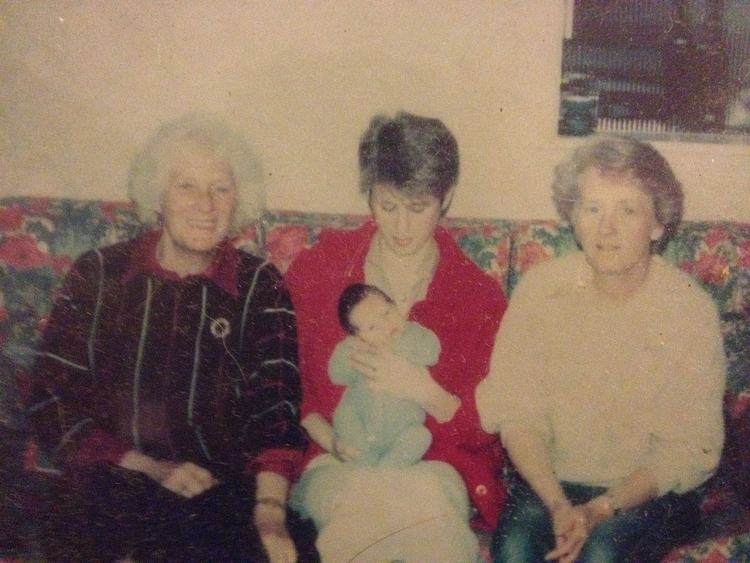 Mum, Nan, and Great Nan with my older brother, Sean, as a baby.

To be high-achieving one generally needs some intelligence or skill but they also need a stable and supportive home environment in which they have space to think, work, and express themselves. Children who have these things available, I think, are more likely to feel inspired and more capable, meaning they will take more chances and be more confident in taking necessary steps. Sometimes it felt all I had was pure determination: I wanted to achieve but I had no particular objectives. I was conscientious because I wanted to make a name for myself and my family but, fundamentally, I was aimless.

For my current job in the NHS—a dream come true for me—I had no leg-ups whatsoever. In my particular case, there was no doctor or nurse in my family, for instance, to inspire me, to help with my application, or to arrange voluntary work. Ultimately, I found a path, alone, by deciding I wanted to help others.

I hope this doesn’t come across as hard done by or bitter. Luck always has a part to play in success, including mine. After all, Winchester is hardly a deprived area and my clever friends provided me with a competitive academic environment. So I am sure that so many more people have had it so much worse. However, luck tends to come to those who are already making the right decisions and have access to more avenues. I would love to apply for a freedom of information request to see how many working-class children make it onto graduate schemes like mine. I feel lucky. But this doesn’t tell the whole story. I think we all know the facts regarding inequality and opportunity: middle-class children have it so much better. 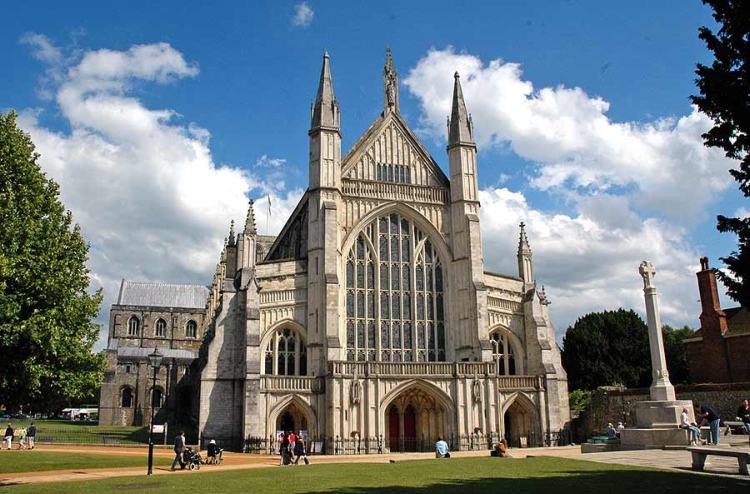 Then there was secondary school, which I now see as a lesson incompetent. There were no programmes in place to identify those living in poverty—nothing to deal with inequality. This was true in primary school too. Our family could not really afford books or revision guides. There was no computer in our house. My mum could only afford to provide me with £2 for lunch money. Excursions to European cities to experience other cultures, student exchange programmes, and ski trips were essentially off the menu, meaning my perspective was often smaller and less enrichened than others’. Regarding my studies, my secondary school, The Henry Beaufort School, did nothing beyond the minimum for me because they realised I would achieve above a C-grade in all my GCSEs—something they were obsessed with. So much for the slogan, ‘Personal Best’! How hollow: Henry Beaufort encouraged nothing of the sort. What genuinely makes me bitter, though, is that they failed to notice my mild specific learning disabilities and speech and reading problems. In competent schools they would have had systems in place to spot them and prime their students to read, write, and speak in public properly. In English I struggled to pronounce words correctly and I didn’t read designated books. I only learned to paraphrase key passages and rely on my own notes. Furthermore, it took me until my late teens, at university, to actually use a textbook and even longer to read a book of fiction for the first time since infancy. As such, until now I have always felt as though I have been playing catch-up because I have to use all my might and creativity to just reach the required grades. Now, imagine facing these problems in worse schools in poorer areas, where little but important solutions, which connect you from one step to the next, are even harder to come by. 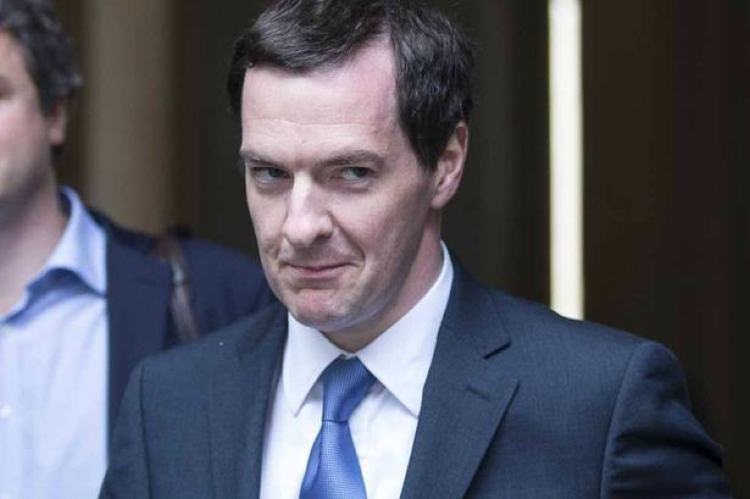 George Osborne of the Tories. EMA was scrapped under the coalition government when he was Chancellor of the Exchequer.

What has exacerbated my sentiments regarding this topic is peoples’ ignorance. When I was 17 years old, at which point I had not fully realised my own social status and understood my surroundings, someone from Winchester callously remarked: ‘Doddsy (my nickname), you are not working-class! You live in Winchester, for God’s sake.’ (Another person from the same friendship group claimed that anyone can attain a PhD in Maths if they try hard enough. If only life was that simple.) I always felt as though I received less support than everyone else but I couldn’t process that and the naivety I saw in others compounded my confusion. Years later, I now recognise, from this collection of experiences, that I was less fortunate than others.

Thus I would argue that I have a working-class background. Though I am a product of many egalitarian policies, such as child benefits and EMA, I feel as though I have had to struggle against many hidden obstacles in a world where one has to compete against others for the same things (mainly wealth and the freedom and peace that comes with it). Ostensibly, there are many superficialities that would suggest I have middle-class roots. But I hope I have debunked and dispelled them. I will always be proud of where I came from, as I become middle-class with my secure, well-paid, skilled job.

Despite any absolute achievements, the biggest accomplishment of mine, I feel, is overcoming hidden adversities I wasn’t capable of understanding at the time. Relatively speaking, they now boost every attainment I was already proud of.