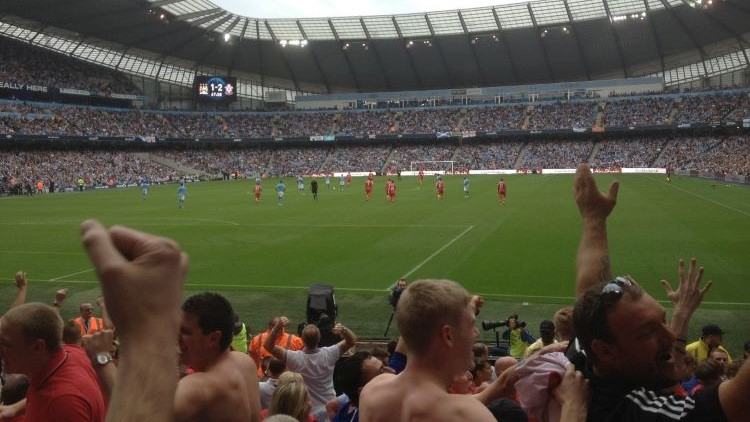 Featured image: A photo I took at the Etihad Stadium in 2012 during a game between Southampton and Manchester City just after 'we' scored to make it 2-1 (to Southampton). The photo captures a scene of jubilation. It was our first game back in the Premier League for a long time. The feeling we each experienced was an explosion of exuberant hope and pride.

Football: 22 people running around kicking a ball for ninety minutes. ‘It’s just a game.’ ‘A bunch of overpaid sissies rolling around on the ground as if they’ve been shot.’ Who cares whether these statements are true or not? Association football is undeniably the most-popular sport in the world. According to FIFA, 265 million people play it. Football also boasts a huge worldwide following: Premier League matches alone are officially broadcast in 212 territories. It’s simply ubiquitous.

But what I find more interesting is how football permeates so many people’s daily lives, including mine, their identities. It determines our emotions. It’s a doctrine of who to unconditionally love and who to eternally despise. Its participation invovles primitive yet innate notions, such as pride, while engendering a sense of belonging. How does a sport have such a grand impact on our lives?

Firstly, football is an extremely accessible sport. All you need is a ball and a large, empty space. (Maybe the latter isn’t required. My childhood involves countless games of heads and volleys on a road against a brick wall.) The result is that the majority of us can participate in ‘The Beautiful Game’.

Furthermore, games are broadcast live, highlights are regularly shown, and updates are routinely included in the news with prominence. Generally, it can be exciting to watch. But these features only explain the ease of following the spot, not explain the pious nature of participation. 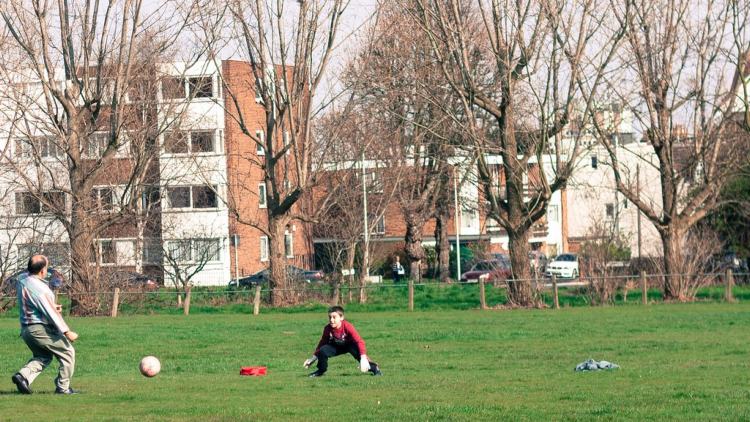 So what is it? One big draw to football is the sense of community associated with it. It helps to form your identity. It’s like you have somewhere to belong that totally makes sense to you even though it’s fundamentally pointless. Football also provides a platform for companionship with seemingly like-minded, well-spirited individuals. If a supporter of the club passes away, the community mourns them. Each club or wider community embodies a camaraderie.

There are, of course, downsides. For example, someone you have never met—a person very similar to you—can be an enemy. I admit it to buying into. I sing about how much I hate my rival team; it’s inexplicably enjoyable. But I’m aware of how irrational it is. I can distinguish the human rational part of my brain from the primitive emotions it is prone to exhibiting. Much of this can be understood through Social Identity Theory (SIT).

SIT explains that self-image of the ‘in-group’ is enhanced by discrimination of the ‘out-group’. Often this entails employing prejudices against ‘them’. At Premier League fixtures one set of fans will zealously sing about how they hate rival fans who they have never met. For example, Southampton fans will sing how Portsmouth fans live in mobile homes and call them ‘skate b*stards’. Clearly, this serves the purpose of strengthening the in-group’s image at the cost of the out-group’s. By belittling a rival team and their fans, one can evoke a sense of pride in their own team and area and promote a sense of self-worth the context of a group. You’ll experience this in other walks of life, not just football (e.g. nationalism). 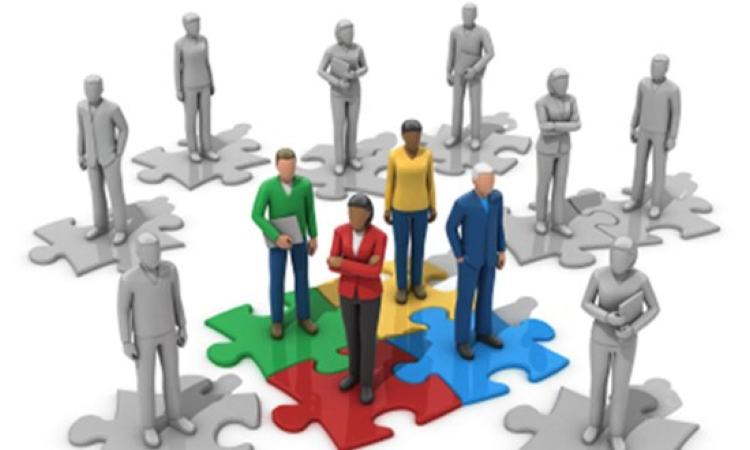 Coming together against an out-group despite differences between in-group members.

There are other theories too. Freud thought that, by being in a crowd, one exposes the unconscious mind, which acts to surmount one’s ego. Gustave Le Bon described how individuals in a crowd lose personal responsibility through anonymity, unquestioningly follow others, and draw emotions from a shared racial conscious, thus unlocking the archaic and uncivilised brain. It is therefore easy to see how a crowd environment is conducive to irrational behaviour and rational questions become less appealing.

Yet this kind of behaviour emancipates one from day-to-day life. For me personally football has always been a constant source of enjoyment and an outlet for my competitive nature. Delving a little deeper, it is a form of escapism for me. No matter what is going on in my life or how bad my week has been, I can apply myself in a completely unfettered way and forget about the rest. I lose my inhibitions. A small victory can seem huge. Anyone can experience this: in the Premier League and on Sunday mornings with the pub team. 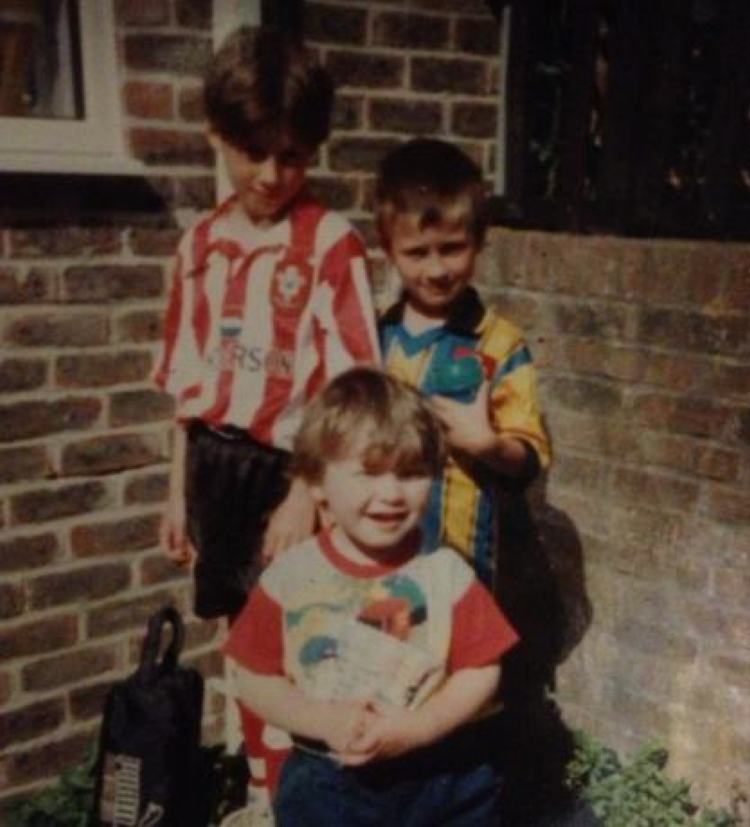 My brothers and I before we headed to Junior Saints training in the mid-1990s.

Like many, though, I am susceptible to becoming a victim of my underlying moods as emotions can overcome me. I do find consolation in knowing that this is a fault of many others too. Look at professionals such as Joey Barton and Luis Suarez (pictured). Observe that they play on the edge, which, most of the time, is a strength. But their urge to win can pull the monster out to uncover what is lying below: expose something profound and ugly. 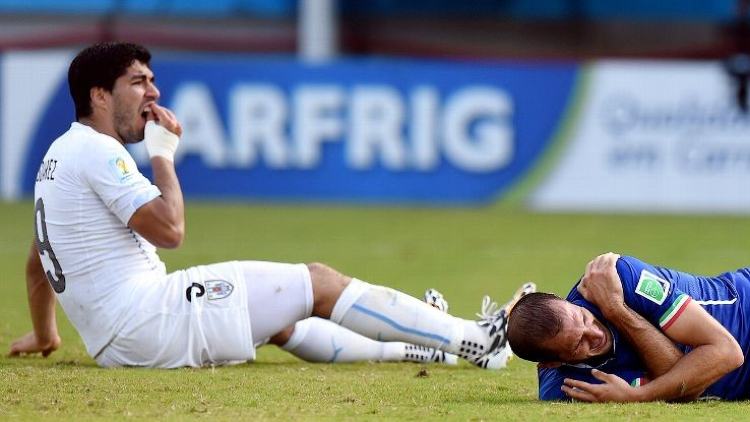 There are many more reasons why football is appealing to so many, as outlined by the Mental Health Foundation:

Even though fans proudly and willingly participate in songs, experience pure elation when the team scores, and share exaggerated sentiments, I’ve always felt that part of committing yourself to the team requires you to condition yourself and conform to the club’s ways. The process of conforming is an initiation of some kind—an indoctrination. It reminds me of having to get on a dancefloor in a club because I wanted to be socially accepted by others.

I’ve always loved football but, when in moments I’ve wanted to enjoy the sport itself, I’ve sat there analysing games, quietly, with no alcohol. My dad will attest this. To sing songs in a group about a common, unknown enemy, to sing when I hate singing, can feel unnatural to me. Most of the time, I love sharing the norms of my community, though, of course.

There are other aspects to football which I actually despise. This includes hooliganism; the conflation of political expression and football, whether that’s the abuse of players who do not align with nationalist sentiments or Nicolas Anelka’s quenelle gesture; racism; and even murder. 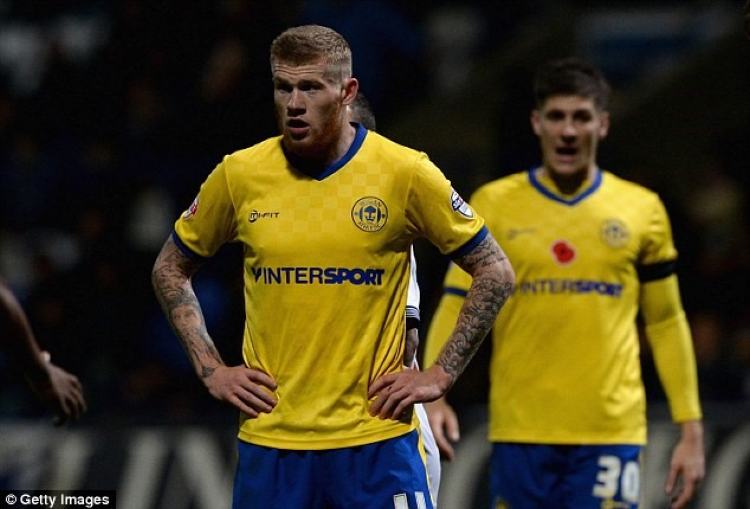 James McClean does not want to bear a poppy on his shirt. He is also opposed to singing the national anthem. He has been abused for both despite their obvious connections to British nationalism.

But there are always good and bad sides to things. The trick is being able to discern the two and take responsibility for yourself.

With regard to supporting my team, I cognitively understand that I haven’t actually achieved anything when I watch ‘my’ team play even though I boast when ‘we’ win. I simply feel an irrational sense of pride. In a way, following a football team exhibits similarities to following a religion or even seeing a band in concert: dedication to it is unconditional, there is a significant community spirit and unit, regular people are idolised, and there’s often no logic to it.

But, increasingly, our support is becoming quantified: our commitment a financial number. Ticket prices are expensive and Premier League television rights are valued above £5 billion (that’s over £10 million per game). 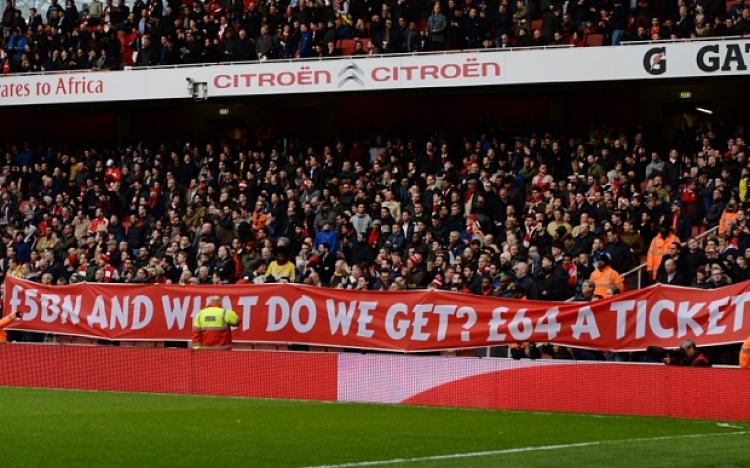 Supporters are being priced out of something they love which is fundamentally very accessible.

The Beautiful Game is being globalised as clubs operate more like sole business entities. As such, a strong source of community spirit is being unnecessarily restricted to local fans. While globalisation is great for fans worldwide, it’s stripping away the core appeal of football. People pursue a sense of belonging. Pricing local fans out of clubs they usually unconditionally follow will a big void in their lives—a void that doesn’t have to be there and whose presence is not hard to prevent. Community spirit dwindling can only be bad news for society: the self-concernedness of individualism only makes us weak.

To be honest, I’m sure other activities could enthuse the nation because we’d find something else to be addicted to. But, even then, a minority of idiots would ruin it for the majority of people who recognise the primate inside of them and let this animal live inside of them in an innocuous way for a few hours on a Saturday afternoon.

In us will always be the capacity for pride and validation to be engaged. By evoking primitive feelings in a non-reckless way during football a positive purpose can thus be served. Let’s not forget that. Let’s not take that away from people.