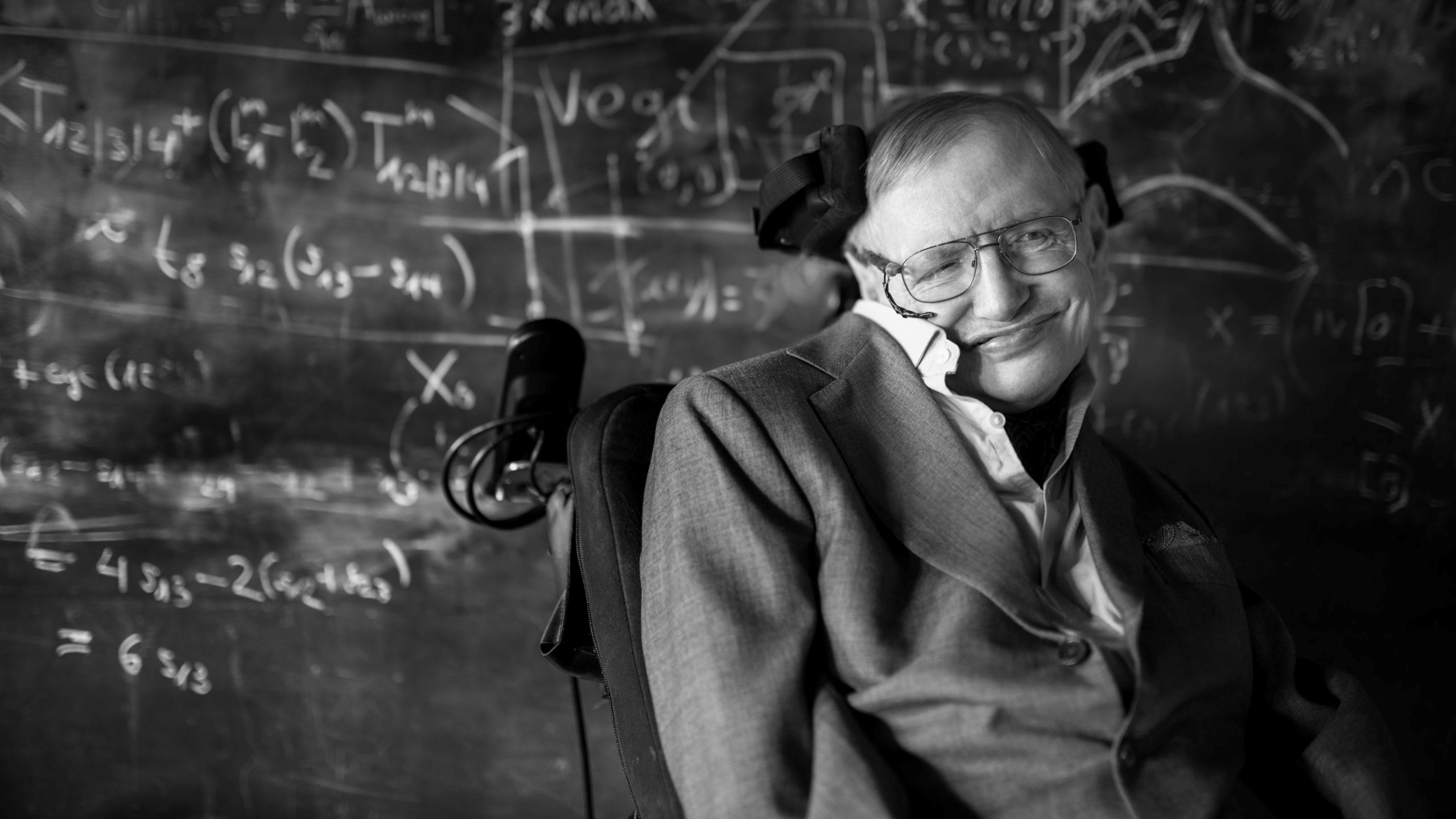 In physics we probe the Universe at a fundamental level. In terms of scale, it’s at the ‘bottom’ of our investigations of the natural world. But how does physics relate to other ‘levels’? It could be the case that we can use physics to interpret the phenomena of other sciences, be they natural (e.g. biology) or supra-natural (e.g. social sciences) investigations.

Why does it matter? Let’s run through what’s at stake. To the consternation of some popular physicists, we may need to consult philosophy. 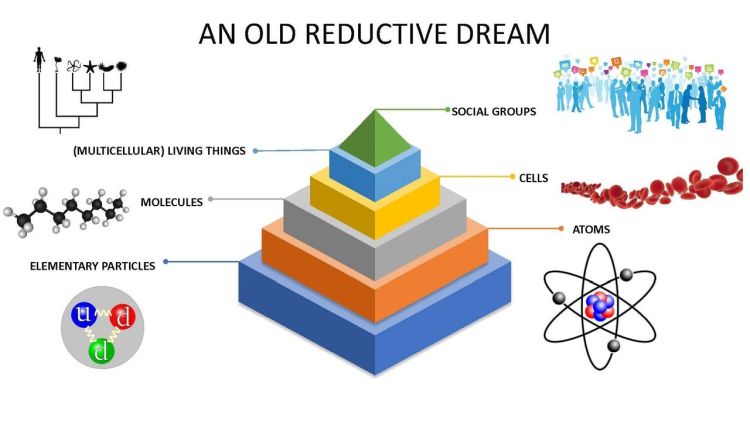 Imagine that our understanding of the world schematically has the shape of a pyramid (kind of): higher-level phenomena can be reduced to the terms of fundamental physics, which are the ‘deepest’ we have available to us. Scientific disciplines usually operate pretty autonomously with some degree of overlap. For example, physicists and chemists have their own disciplines, describing atoms and molecules respectively. But, in this vision, we could dispense with parts of the latter and replace them with parts of the former. (The Metaphysical Unity of Science Project)

This hypothesis may sound simplistic: a dream conceived by a know-it-all physicist who wants to be able to explain everything by themselves. But so what? We want to assess the view’s viability, not judge it by whom holds it.

Reductive intuitions seem to underlie many of our beliefs about the world already: that our understanding can be increasingly reduced downwards to other domains of enquiry, where physics is the most fundamental. (We will sidestep the question of whether the laws of physics reduce to the models of mathematics.)

To capture the point in the words of the great Fyodor Dostoevsky in Notes from Underground:

From fundamental physics everything else follows, the story goes. In theory, it can explain the phenomena of other sciences. Perhaps with reduction we can even eliminate the need for particular laws and concepts in other domains, that is, as we metaphorically pass through a particular domain, we can replace its laws and concepts with those of physics. For example, a very clever physicist of the future might one day be able predict decision-making in humans by reducing their behaviour in terms of psychology to extremely sophisticated atomic-level models. This is ambitious. But let’s run with it.

I’m not supposing that through physics we can actually come to understand everything. This is far too expansive an aim: physicists don’t have the resources—technologically, financially, mentally, and otherwise—to exhaustively come up with and validate all of their models, while there are always more ways of looking at things and always more questions to ask. Rather, what is at stake is the theoretical scope of physics in capturing scientific patterns and regularities across the pyramid. 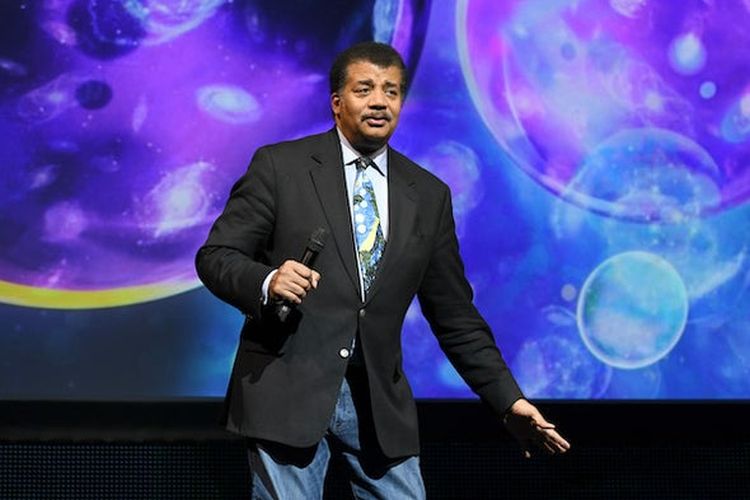 Neil deGrasse Tyson thinks philosophy is useless. This is a convenient position to hold if you care about science occupying a central role in our discourse. Likewise, other famous physicists, including Bill Nye, have shown a way of disparaging and misrepresenting philosophy in their pursuits, favouring instead a science-based discourse. Though maybe they’re right? (Craig Barritt/Getty Images)

The reduction of scientific principles to the basic building blocks of physics is a tenable position, as is the belief that the objectivity of scientific knowledge trumps other pursuits outside of science (as per scientism). But there are some non-trivial issues it must contend with.

Arguably, in physicists’ hubris—or maybe just in their naivety—the role of physics is overestimated and the roles of other disciplines are underestimated. Despite fantastic progress in our knowledge of the natural world and excellent accuracy and precision, physics has enough trouble characterising empirical data in physics. Take our various models of the atomic nucleus. At best, they are approximate. They capitulate when the target system is an element of even medium size (the smallest being hydrogen). Still, these differences could just be minor or temporary discrepancies. Doubt, after all, is part and parcel of good scientific practice.

Tonnes of scientists are interested in and do value philosophy, some of whom, like me, have made the switch from scientist to philosopher. However, anecdotally, it feels like there is a tendency in physicists to believe in the ultimate power of physics. More so than other disciplines, there is a sturdier confidence in physics, possibly in virtue of a physicist’s position to ask fundamental questions, ignoring their presupposition of reductionism.

Such ambition and confidence are not true of every physicist, of course, and are applicable to non-scientists (e.g. philosophers), while scientists of other disciplines are also guilty [points to Richard Dawkins’ tweets, which expose his somewhat ignorant views on philosophy, including this one from 6th March 2021]:

[Are science’s truths really that absolute? What is the scientific method without people?]

I am strongly of the belief that science and philosophy ought to work together. The findings of each inform the other. Yet there is needless competition for the spotlight. Similarly to deGrasse Tyson, Dawkins, et al, Stephen Hawking in The Grand Design declares that ‘philosophy is dead’. He says it hasn’t kept up with findings in science, for which he claims the spotlight:

In Hawking’s own research he sought to unify general relativity and quantum mechanics and spoke optimistically of grand unified theories, such as the Standard Model, which ‘explains how the basic building blocks of matter interact, governed by four fundamental forces’ (CERN). As such, Hawking longed for a way to elucidate the Universe with science, starting with physics, showing that the Universe is a giant clockwork to be discovered. What I don’t get is why this pursuit shouldn’t be made with the help of philosophy.

Is reductionism the correct worldview? The answer probably requires consulting at least some philosophy to know where to start. Give us that, famous-TV-physicists!

A case in point 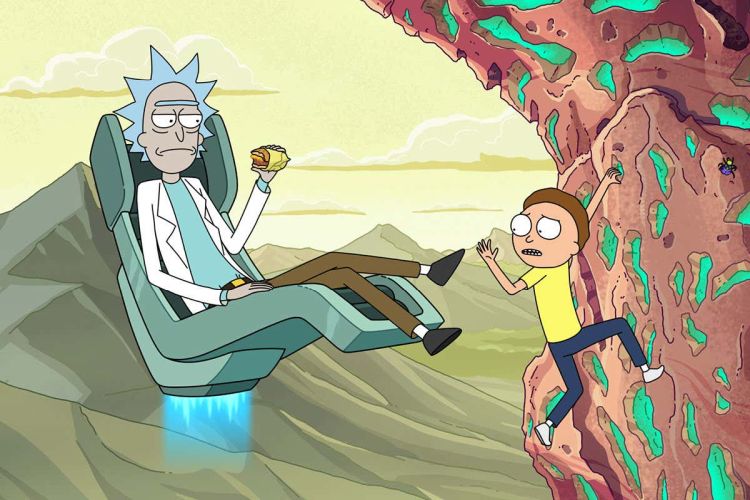 Nothing seems to be beyond the scientific powers of Rick Sanchez from Rick and Morty, who manipulates the world around him and the people in it with scientific trickery. (Warner Bros. Television Distribution)

One problem with reductionism is that, by reducing the phenomena studied in other sciences to the equations and such of physics, we do not capture all the relevant details.

Let’s look at an example. Here are two quotations, both made along the same point, often attributed to Niels Bohr (without citation):

As charming as this idea is, it exemplifies how scientists make assumptions about the natural world they investigate. Here they tacitly adopt the thesis of physicalism, that is, they assume everything can be explained in physical terms, including consciousness, when, at best, a self-aware atom is a metaphor because atoms themselves don’t have consciousness and don’t know or understand anything. While the thesis of physicalism may be correct, their picture is a philosophy-deficient oversimplification.

A faction of philosophers will be at hand to help physicists defend physicalism; however, physicists will be on their own to explain consciousness in terms of physics. What is the role of physics here, if any? For instance, as per ‘the hard problem of consciousness’, how are we going to explain phenomenal, first-person, subjective, ‘it feels like’, experiences?

Neuroscientists and philosophers of mind, at least, are going to fight physicists for the floor—and they deserve it until physicists can harness enough conceptual resources to scale up their explanatory game to the level of consciousness. They besiege the lands of other disciplines with their metaphor.

Sure, much of the Universe can be explained in physical terms and physical matter is required to host all kinds of non-physical phenomena. Furthermore, perhaps physics can complement such knowledge whilst imposing restrictions on what kinds of theories we can use. But it does not automatically follow that physics has sufficient explanatory power to describe phenomena above it in other domains of enquiry. 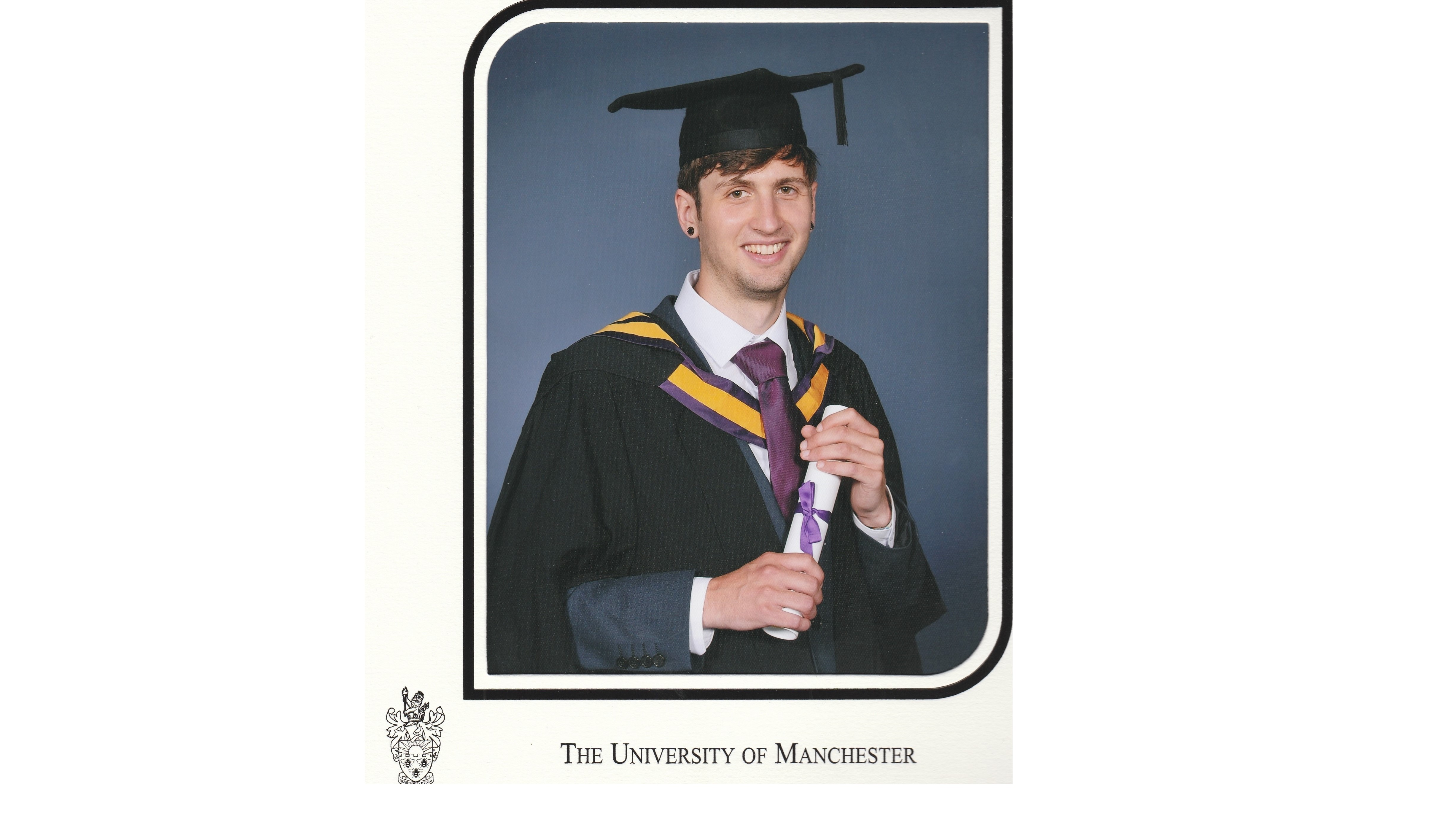 Before I moved into philosophy I kind of followed the idea that everything eventually fell at the doorstep of physics. To understand the fundamental was what motivated me to study physics at university and beyond. Now I have big doubts and I hope philosophy as well as science can give me answers.

Our understanding of the world may not be pyramid-like at all. Yet if it’s not correct to simplify our conceptions of the world and make them basic at the level of physics, are there alternatives?

One contesting view belongs to Nancy Cartwright, who argues in The Dappled World that the Universe is more chaotic than the picture reductionism paints. The world is a tapestry whose laws aren’t basic and elegant, she says, but ‘dappled’. There are

We strive for order and reductionism offers it as a neat, downward-facing system of understanding, which we project onto a natural world which is actually messy and disordered.

It follows from Cartwright’s view that scientific disciplines—chemistry and physics and psychology and biology and so forth—could be quite autonomous from each other and that theories don’t necessarily transmit upwards from ‘the bottom’ since, simply put, the world is more ‘erratic’ than reductionists think it is.

To take an example, some philosophers of science, such as Olimpia Lombardi, claim that some areas of physics that seem relevant to chemistry don’t breach it, that is, physics cannot usurp certain laws and concepts of chemistry. Nor can the findings of chemistry always be reducible to the findings of physics. For instance, there are too many issues with explaining molecular structure exclusively in terms of the laws and concepts of quantum mechanics. (Or is this the defensiveness of chemists? ‘Get off my turf, physicists!’)

Does this mean there can be multiple truths for one target system? This thesis sounds a bit crazy. Nevertheless, Michela Massimi argues that ‘scientific pluralism’ is an appealing candidate position. She argues that there are kinds of situations and interactions between factors that require multiple models or theories. Together they can represent a target system in many ways instead of intuitively having one all-encompassing account.

In adopting this thesis we may find ourselves representing inconsistencies between the models. So surely, one might ask, only one model can be right? Take the atomic nucleus (Margaret Morrison’s example). The atomic nucleus is represented with multiple models: liquid drop, shell, coloured quark, cluster, etc. In each model the same essential properties may be ascribed (e.g. about Coulomb’s force) but different properties are also ascribed (e.g. based on quarks and not clusters of nuclei). Which model do we choose? Perhaps they are both ‘approximately true’. This opens up conceptual space for the truth of physics and the truth of chemistry, much to the dismay of the reductionists. 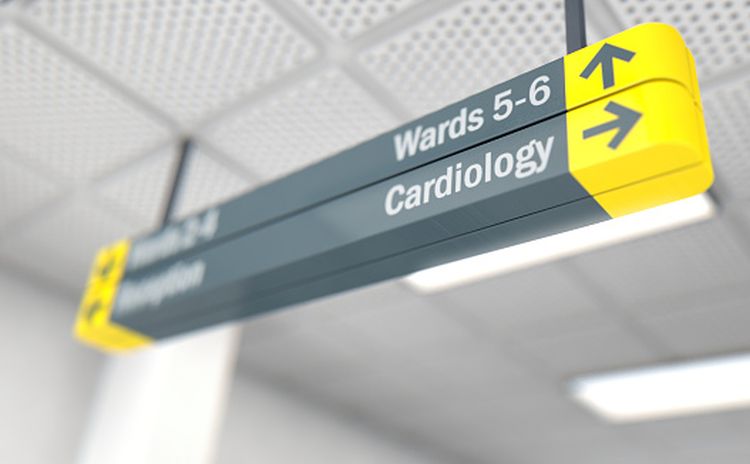 On what basis do we divide scientific disciplines? Doctors of medicine do it by body part. (iStock/Getty Images)

In the abandoned house of philosophy some secrets are engraved into old wood. Agitating the surfaces, we can find markings beneath the gathering dust. Some endanger the assumptions physicists don’t even realise they’re making, raising serious questions about our scientific conceptions of the world.

Is the natural world modellable with a reductive pyramid, an intuitive dream of humans who project order onto the world; the chaotic patchwork of a dappled world; or one of a myriad of other ‘shapes’? How are theories transmitted between the domains? To what standards should we adjudge the proposals?

What are the correct answers? As always with The Human Front and probably to the amusement of physicists, we offer no definitive solutions. Worse, we’ll offer one more beguiling possibility (anonymous):

Inspired, amused, or simply just frustrated—thanks for stopping by.