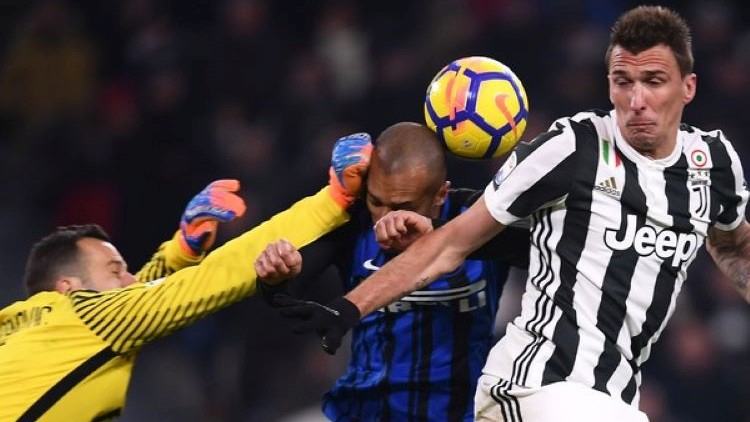 I know, I know. Yes. Get it out your system now. Laugh at the irony of this article’s title. Football, admittedly, is not exactly the home of deep thinking. There is one person who is arguably more of a philosopher than all of us though; and, as the enforcer of the game’s laws, they are incredibly important.

He is the referee: the match official who makes a barrage of decisions every minute, constantly processing torrents of information in real time. Under a lot of pressure to get each decision right, a good referee is only ever correct most of the time. When they aren’t they are faced with intense public scrutiny and dissection and riled-up dissent (sometimes from me). 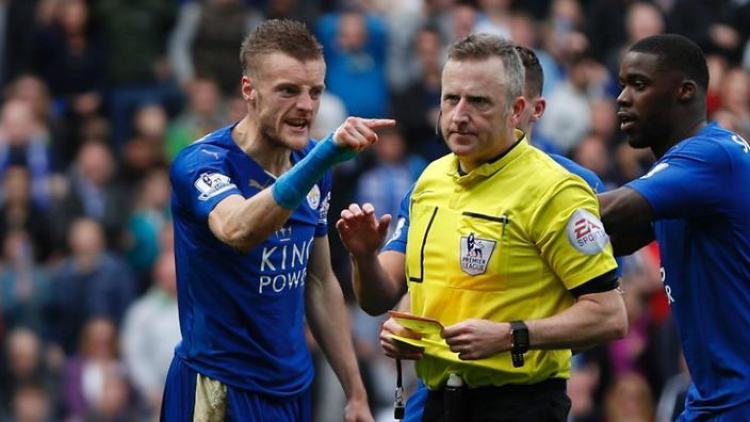 Jamie Vardy was charged for aggressive behaviour in 2016. (AFP)

There are many ‘simple’ calls for the referee to make during a football match—the ball clearly just went out of play; the player definitely just committed a foul-throw; that was obviously a foul because they poleaxed the guy! But these are easy pickings. In contrast, there can be multiple valid interpretations of what just happened, for decisions are made on fine margins, and an event can be over in a flash. It becomes trickiest, however, when we enter the realm of subjectivity: when, in the eyes of the law, the referee has to somehow determine what a player intended to do.

Often for a match fee of around £30, they have to become a mind-reader. Seems fair.

What can the referee do in these situations? This is where we depart the barren intellectual wasteland of Man-Kick-Ball and begin the ascent up towards the Ivory Tower of Philosophy. They might respect referees up there (though they’ve probably never had to play under the jurisdiction of a shit one).

Seriously, though, let’s assess whether a referee can figure out what a player intended to do fairly. Interestingly, it might not be possible …

According to the FA, a player can be penalised for committing an offence on the basis of it being deliberate.

The same is true of physical interactions which the referee deems dangerous. These are labelled as forms of ‘violent conduct’ when the player is adjudged to

Meanwhile, it is considered an offence if the referee interprets the player to have

Robin van Persie claimed he was falsely penalised for this last one against Barcelona in 2011. 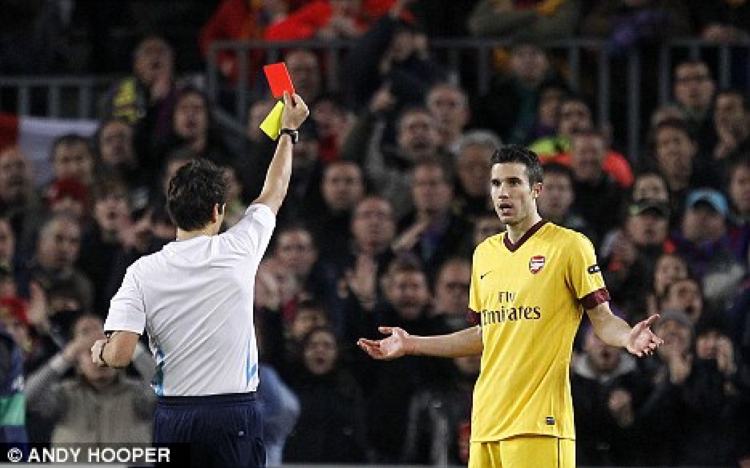 If the referee guesses the player’s intent wrongly, the act of penalising them is an injustice. In the case of van Persie’s deliberately touching the ball after the referee has stopped play, van Persie claimed he didn’t hear the whistle above the Camp Nou’s 95,000-strong racket. If true, it would have been grossly unfair to penalise him for misconduct such as timewasting or petulance.

Yet how was the referee meant to know van Persie didn’t hear the whistle? There is a fundamental disjunct between what the player knows and what the referee can see. The referee can’t go back in time and live through the player’s unique perspective (assuming, too, that the player consciously thought about their action before doing it). The referee can look for signs of intent, including certain ‘unnatural’ movements of players’ limbs and any telling body language, but, at the end of the day, intention is something which is buried within ourselves and the signs in front of a referee can be misleading. A human can give off clues as to what they meant to do but the mental causation behind their actions is still never truly connected to what the referee observes.


My uncle and ex-referee Steve Ross.

The referee has to make a judgement call; but this is just lingo for ‘guess’. We’re complex beings: a subjective process of interpreting what a player subjectively meant to do is easily muddied by spurious signals. The referee can’t, for instance, rely on trusting a player to tell the truth, who will do anything to win, or gauge how a player reacts to an event because they might just be a bit of a funny character and you’d be punishing them unduly. Nor can the referee really know whether a player feigned an injury to waste time or is genuinely hurt. All of these unknowns leave a vast space for injustice; but the referee, by choosing whether to react or not react to an event, is still expected to do something and is lambasted accordingly.

Ex-referee Steve Ross had the following to say on what it’s like for referees in such situations:

Nonetheless, the referee might be able to justify a stance on this problem of the unknown by practically getting it right most of the time. They could employ a bit of consequentialism: jargon in moral philosophy for assessing events in virtue of how they ended. (‘Ahh’, I hear the philosophy students sigh. Not me, though: I’m here to have some fun.)

What I mean by ‘consequentialism’ here, in the sense of football, is that some fouls are defined by objective things the referee can see. For example, they should give a player a red card for committing a foul when they are the last man: whatever the player intended to do, they stopped a goal-scoring opportunity. This is in stark contrast to ‘Kantianism’, a theory that can be applied to the kind of offences in football I’ve talked about so far: the philosophy of intent, regardless of the outcome. 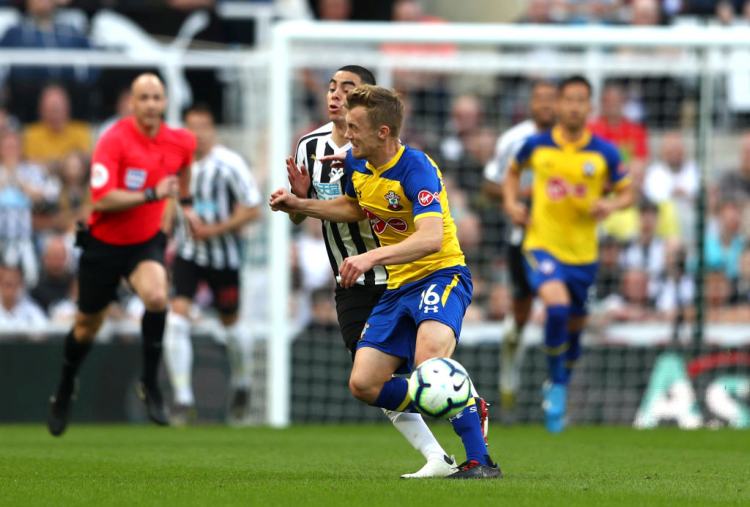 Southampton and England player James Ward-Prowse was fortunate not to receive a red card against Newcastle (20th April 2019). He committed a foul as the last man of the defending team, a fact which is irrespective of whether he knew what he was doing. I would argue he wasn't aware of being the last man. It didn't matter anyway because Southampton lost 3-1 and deserved the thumping. (Matthew Lewis/Getty Images)

In fact, the rules of football pluck at both forms of philosophy. Consider tackling. Now, some kind of tackles are forbidden on the basis of the actions themselves, such as tackling with your studs up. The rules around it, I assume, are designed to prevent injuries and ensure the ball is won from opposing players fairly. Meanwhile, other actions, such as showing a ‘lack of respect’ and ‘reckless’ challenges, are more in tune with Kantianism because it has more to do with the character of the player.

Manchester United player Nani was sent off against Real Madrid in 2013 for using excessive force against Alvaro Arbeloa despite probably not intending to. The law used against Nani was, therefore, consequentialist in nature. (Kerim Okten/European Pressphoto Agency)

This prima facie stance of consequentialist football law is arguably unfair. It has an equivalent in criminal law: punishing people for genuine accidents with their lives when many people are let off the hook for performing the same unpunished actions. It leaves justice in the hands of luck. But what is the alternative?

In conclusion: The importance Why is any of this a big deal, even within the context of football?

Well, football is the biggest sport in the world; and as players, members of staff, and fans, we want to see the talents of players reveal themselves, teams bond and thrive together, and the Beautiful Game flow in front of us. What we don’t want to see are petty disagreements about how ambiguous rules should be interpreted. Simultaneously, we ought to encourage fierce but respectable competition between opposing players to bring out the best quality in each side.

How should this be achieved? We want (i) consistency so we know where players stand, (ii) players to be protected from maliciousness, and (iii) rules that facilitate entertaining football.

We also want fairness so blame and punishment are dished out to players who we think genuinely commit fouls (just like players are recognised and praised for apparently intending to do good things on the pitch1). This should enhance our chances of meeting the three criteria above. But, as we have found out, even if the referee is alert, observant, fit, quick to react, can recall a specific rule immediately, and has access to slow-motion replays on the side of the pitch, they still don’t have clarity when they have to interpret the intent of a footballer—just some vague notion of common sense—an all-purpose glue which only incoherently pieces together events.

Maybe this ambiguity is good. Great controversy drives the sport: it allows us to fill the void of certainty around a decision with a unique opinion such that we can each verbally contribute to the excitement around the match, creating discussion points and reinforcing football as a big-community experience.

However, it is the referee who is responsible for creating the controversy, whether they like it or not. Ross added:

As they express a speculative belief as we sit safely in the stands or in our homes or a pub, they must take the stick, whilst they rarely receiving acclaim. It is the referee who pays the price for not being able to connect their belief to the player’s thoughts, which, fundamentally, is an impossible task. In return for an entertaining game of football, with little in the way of unjust controversy, I guess, then, the least we can do is cut the referee a serious amount of slack for what they can’t help.